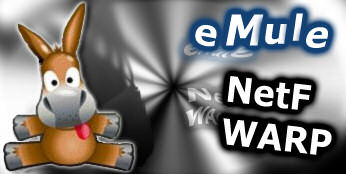 eMule NetF WARP的特色功能:
Sub-Chunk Transfer
– Crumbs, enables sharing of not yet completed parts
Faster Endgame
– Dynamic Block Requests, tries to make all sources to complete at the same time
– Delayed NNP, keeps downloading sources a little bit longer in case a part turns out corrupt
– Drop Stalled Sources, cancels stalled or slow downloads when file is about to complete to give way for faster sources
– Redownload only data of banned clients on corruption
Anti-P2P Protection
– Safe KAD (slows down the spreading of bad KAD nodes)
Credits and Payback
– VIP “Payback” Queue, as the Payback queue but with different bandwidth management
– Balanced Ratio Payback, make clients, who have a ratio higher than your inverse ratio, VIP’s
– Smart Part File Push, rebalances between complete and part files based on previous upload
QOS (Vista/7 only!)
– Allow Windows and compatible routers to prioritize surfing and VoIP before eMule (upstream only)
Bandwidth efficient
– Tries to maximize the amount of data sent in each IP packet by identifying the maximum segment size (Vista/7 only!)
All the features of the ESE Mod
支持平台：
操作系统 | 32 位版 | 64 位版
Windows 2000 | No | N/A
Windows XP | Maybe | Maybe
Windows Vista | Should work | Should work
Windows 7 | Yes | Yes
Wine 1.1.41 (Ubuntu 9.10) | Yes | N/A

Changelog:
*** NetF WARP 0.3a.14 BETA
– Fixed the Fakealyzer code so it works again. Also improved it by taking account the number of Kad publishers.
– Improved performance of FastKAD to be comparable in speed to a server search. (optimum performance is met after KAD has been running for a couple of minutes)
– Improved TCP-MSS Awareness; Now also checks the local interface in case your MTU is lower than the remote end (fixes problem with anonymizing VPN services)
– Added a missing security check in AsyncSocketEx code (thanks dolphinX for pointing that out)
– Removed the obsolete HTTP 1.0 choice in proxy settings (thanks dolphinX for pointing that out)
– Added new SafeKAD2 feature; Ignore problematic contacts (kind of banning but only for a short time) (doesn’t seem to work at the moment)
– Added a security check to AsyncSocketEx code and fixed som type casts too
– Changed a lot of DWORD in the source to the proper clock_t, time_t and size_t types. To get rid of some typecast warnings, and to make the purpose of a data member more clear
– Added a lot of const specifiers in the source to help the compiler generate better code, and maybe to catch some bugs too!
– Reordered some code to allow the compiler to generate more compact data structures, which should improve the CPU cache hit ratio
– Replaced alot of C-style type casts to the proper C++ ones (this is safer and marks more clearly were there is code that might need fixing)
– Fixed alot of compiler warnings
– Fixed a rare deadlock in CKnownFile::CreateHash when hashing data in a CMemFile object
– Changed the file IO cache mode to random access for most operations to allow the OS to better utilize its resources
– Added new part selection algorithm that now also takes the rarity among the current transferring sources into account (currently choses parts on the left when same priority, but that is quite rare)
– Added progress and status notification into Windows 7 taskbar (progress status need some polishing)
– Attempt to start eMule a second time will now bring the already running eMule client to front