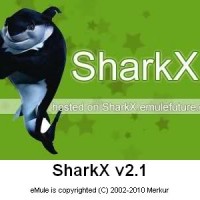 SharkX is not close to it’s pre 2.0 versions.
From now on SharkX won’t be a vanilla mod (I’m not that skilled, nor “my statement” is that different from all existing mods), it’s based on eMuleFuture and it’s likely future SharkX versions will continue that path.

1. Leechers detection and treatment : since there’s no official dictation about right and wrong regarding mod name or nicks – there’s no real harm done by mod/nick fakers/thieves or ghost as such. As such those are just trying to take advantage of unfair benefits given by some mods (which should be punished for giving such advantages). It’s likely that such mods are doing other stuff that is harming ed2k – for that they should be punished, so being just a mod/nick fakers/thieves makes one suspicious. Suspected and leechers mods do not enjoy PowerShare with SharkX and since from time to time they tend to introduce themselves as “new” (by changing modstr) they are treated upon such changes as starting a new session (loose waiting time). Friends are not treated as leechres or suspected.
2. Anyone downloading from us (really – not just being in upload list “dying” since we stopped sharing the file he was downloading) won’t be able to get into queue before releasing the slot. If he “wishes” to release the slot (by asking for another file – and it’s not really about our upload files priorities, even more true if we support “a separate queue” for each file) – … well he won’t be stopped
3. Due to main toolbar changes (mainly IRC removed) : clean install is recommended, or at least remove of the line containing ToolbarSetting from preferences.ini before using SharkX v2.0/v2.1 for the 1’st time (i.e. clean install needed if migrating from other then SharkX version v2.0 or later).